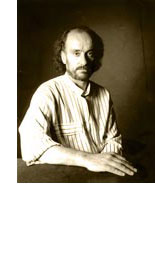 Goran Stefanovski (1952) is a Macedonian playwright and screenwriter. He was one of the leading playwrights of ex-Yugoslavia. In 1986 he founded the playwriting course at the Faculty of Dramatic Arts in Skopje, Macedonia where he was a full professor until 1998. As a Fulbright Outstanding Artist Scholar he taught at Brown University, U.S.A. Between 1998 and 2000 he was a visiting professor at the Dramatiska Institutet in Stockholm. Since 2003 he has been teaching at Canterbury Christ Church University, U. K. He is a member of the International PEN Club and of the European Cultural Parliament. In 2004 he was elected a member of the Academy of Arts and Sciences of the Republic of Macedonia. Goran Stefanovski’s bibliography is comprised of books of plays, essays and academic books. His works have been translated and published in a number of languages.
They have been staged and performed on TV. Films have been made after
his screenplays. Currently he is a free-lance writer, living in Canterbury, U.K.

“Zakaj Balkan ni seksi” (“Why the Balkans are not Sexy”, a Slovenian translation of the essay from: Tales from the Wild East), Air Beletrina magazine, Ljubljana, Slovenia, 12-13, 2001.
“A Tale from the Wild East” in: Alter Ego, Twenty Confronting Views on the European Experience, Amsterdam University Press, Salome, 2004.
Prikazni od diviot istok (Tales from the Wild East), essays and interviews, Tabernakul, Skopje, Macedonia, 2005.
“O našoj priči” (“On Our Story”), an essay, Mostovi magazine, 129-130, Beograd, 2005.

Goran Stefanovski’s works have been translated and published in a number of languages: Bulgarian, Chinese, Croatian, Czech, Dutch, English, French, German, Hungarian, Italian, Polish, Russian, Serbian, Slovak, Slovene, Swedish and Turkish. The play Bacchanalia was translated into Slovene by Zdravko Duša and published in the anthology Dramatikon 2, while HI-FI was translated into Slovenian by Mateja Dremelj-Rapoša. There were stage productions of Flying on the Spot by Slovensko ljudsko gledališče Celje, directed by Mile Korun, of HI-FI by Mestno gledališče ljubljansko, directed by Zvone Sedlbauer in 1983 and of Bacchanalia by Primorsko dramsko gledališče Nova Gorica, directed by Sebastijan Horvat.

From the laudation by Lidija Dimkovska:
“Goran Stefanovski belongs to the category of those authentic authors who delve into their intimate and more wide local cultural heritage, which they question and then announce the replies to the essentials of life and existence of the individual and of the society to which he/she belongs. Their stories being either trivial or great are then offered to the global society where they function as both intimate and universal.”