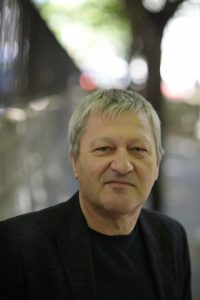 Dragan Velikić was born in Belgrade, Serbia, in 1953. Since his father worked as a naval officer, the family moved to Pula five years later, where he spent his childhood and youth. He returned to Belgrade to study comparative literature and literary theory at the Philological Faculty. He wrote his first short story at age 26 and, after receiving a warm welcome by reviewers and readers alike, decided to become a professional writer. From 1994–1999 he also acted as the editor of publishing house Radio B92 and as a columnist for several Serbian newspapers; as well, he wrote about the social and political climate of the time for Austrian and German media. Since he could not accept the position of “ours” and “yours” in the wartime in the 1990s, he publicly criticized Slobodan Milošević, Croatian and Serbian nationalistic politics and strongly opposed the war, he was soon branded as a national traitor. He left Belgrade just a few days before the NATO bombing in 1999 and lived for a period in Budapest, then moved to Berlin and later to Vienna, where he was the ambassador of the Republic of Serbia between 2005 and 2009. It is precisely these stays in different European cities, from the childhood on, that have enabled him to never feel fear of something “different”. In the essay Voice from the Crack, he writes that he most highly values tolerance, understanding of other cultures, traditions, habits.
Velikić is one of the most prominent and distinguished contemporary Serbian writers, and in the view of literary experts he is already one of the classics of Serbian literature. He has written eleven novels – the last one, Adresa (The Address), being published in April this year – three short story collections and six essay collections. He also published two collections of columns and interviews. He is not only praised by the reviewers but also very popular among the readers. His works sell in incredibly large numbers, at least in comparison with authors from the former Yugoslav space, and are usually reprinted several times. The novel Islednik (The Investigator) has thus far sold 50,000 copies and was also the most borrowed book in Serbian public libraries in 2016. He is also well known in the international space; translations of his works have thus far been published in 16 European languages, Arabic and Persian. We can read the following novels in Slovenian: Astrahan (Astrakhan, Cankarjeva založba, 2004, trans. Maja Kraigher), Dantejev trg (Dante’s Square, KUD AAC Zrakogled, 2013, trans. Urban Belina), Rusko okno (The Russian Window, Društvo slovenskih pisateljev, 2014, trans. Matej Krajnc), Bonavia (Cankarjeva založba, 2014, trans. Dragana Bojanić Tijardović), Preiskovalec (The Investigator, Cankarjeva založba, 2018, trans. Đurđa Strsoglavec), the essay collection Glas iz razpoke (Voice from the Crack, Wieser, 1992, trans. Boris A. Novak), and another essay collection, O pisateljih in mestih (On Writers and Cities, LUD Literatura, 2019, trans. Mateja Komel Snoj). Velikić has received the most prominent Serbian literary awards for his works: for the first novel Via Pula (1988) he received the Miloš Crnjanski Award; for the novel Ruski prozor (2007; The Russian Window) the Nin Award and Meša Selimović Award – both for best novel of the year and Austrian award Mitteleuropapreis for a special contribution to the Central European space; for the novel The Investigator (2015) he received the second Nin Award for best novel, alongside the awards Kočićevo pero and Kočićeva knjiga and also Vital Award.
A writer who often explains he is “a poet that writes prose” – his writing radiates a rhythmically harmonious character – Velikić polishes his style, burnishing even the tiniest of details. The constants of his literature are a regression to childhood in Pula, his “spiritual homeland” and the experience of the journey. Literary protagonists, family members or fictional anonymous characters often travel around; they “circulate” among the well-known Central European cities, all with the intent of being able to return in the end to the point of their initial departure, enriched with experience and insight. In his complexly built works, Velikić masterfully shifts between the (auto)biographical and the fictional, between the intimate and the social, between the past and the present, all until he manages to assemble a wholeness out of these fragments that tells us about one single spiritual space in spite of the borders.
Dragan Velikić currently lives in Belgrade as an independent writer. He still represents the uncompromising voice of reason, tolerance, firm ethical beliefs, and he remains a harsh critic of Serbian and international political reality; this means he is one of those European literary voices that are desperately needed in times of rising nationalism, not only by Europe but by the whole world. He is still the voice from the crack.
Translated by Urban Belina

Laudation
Prepared by Jutka Rudaš, member of the Vilenica Jury