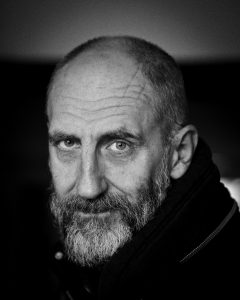 Esad Babačić was born in 1965 in Ljubljana, where he grew up in a working-class migrant family in the apartment blocks of the Moste and Vodmat housing estates. He found employment as a manual laborer in the Žito bakery when he was still underage. At that time, he met some boys who had a band, but no singer. Esad stepped in front of the microphone and also became the main writer of the lyrics – so in 1983, Via Ofenziva, one of the most important punk new wave bands, came to life. The band soon gained not only the attraction of young music fans, but also of the regime. Because of the socially critical lyrics (for example, “The Prole,” a song with a cult status today), the boys were often interrogated by the police. Military service put an end to the youthful fooling around. Babačić served his military time in Titograd (Podgorica).
After returning to Ljubljana, Babačić started studying Slovene language and literature, as well as Southern Slavic languages at the Faculty of Arts. Besides poems, he also began writing literary criticism, translated from Serbian and Bosnian, published columns in several newspapers (Razgledi, Dnevnik), was a journalist for the Slovene national television, and for a while even worked as a writer for a marketing agency.
In his work, Babačić keeps traversing different areas of art. He has published twelve poetry collections so far, a bilingual children’s book Kiti plavajo počasi/Whales swim slowly (2014), the biography Tough Fighter (Trdobojec, 2010) about the boxer Dejan Zavec, as well as a literary non-fiction tale about Slovene hockey under the title Banda (2013). He has acted in several feature films, taking secondary roles in Outsider (1996) and Headnoise (Zvenenje v glavi, 2002), as well as in the lead role in the documentary Every Child Is Beautiful When Born (Vsak otrok je lep, ko se rodi: Esad Babačić – Car, 1983) by the director Slavko Hren. He also shot a short film Kozara – Lj. – Kozara(1998), the hockey film Jesenice: Detroit (2008) with co-scriptwriter and director Damjan Kozole, and the two documentaries Dragotin Gustinčič (2015) and For Happier Days: Kajuh (Za srečnejše dni: Kajuh, 2015) with co-scriptwriter and director Slobodan Maksimović.
Besides his work in art, Babačić is also the initiator of the project “Believe in Your Basket” that strives to renovate basketball courts, while in 2018 he took part in the project “We Include and Activate!” Aimed at the social activation of vulnerable groups, this project is being carried out by the Slovene Book Agency. He stepped into literature from the margin. He wrote about what he saw and lived; his “street” poetry never looked back towards literary history and it never cared much for the literary present either, which is also why it couldn’t be comfortably placed it into any of the literary movements of the time. His poetry is unique because it is uncompromising, it is full-blooded, it hits you directly in your mug – it is just like the seventeen-year-old was when he wrote it; as he roared against the social order of the time and resisted the “lethargy of unfreedom.” After his poetry was published in several magazines, he published his first poetry collection Kavala in 1986 and another one, under the title Freedom just walking (Svoboda pa kar hodi), in the same year. Other collections followed: To the Little Boxer (Malemu boksarju, 1988), The Angel with Shredded Wings (Angel s scufanimi krili, 1989), Black Jack (1994) and The Wind in Veins (Veter v žilah, 1994). After a short poetry silence, when he had to re-evaluate his attitude towards poetry, he published Whales Do Not Showboat (Kiti se ne napihujejo, 2000), The Divan (Divan, 2006), Biospektiva (2010; co-authored by Roman Uranjek), Every Child Is Beautiful When Born (Vsak otrok je lep, ko se rodi, selected poems, 2011), Elephants Have a Fair Cry (Sloni jočejo pošteno, 2011), Arrivals, Departures (Prihodi, odhodi, 2013), Kitula (2015), Fifty Selected Poems (Petdeset izbranih pesmi, 2015), and Cut Off the Sky (Odrezani od neba, 2018). Esad Babačić’s poetry has been translated into many languages and has received several awards. Among others, he received the Velenjica-čaša nesmrtnosti (Velenjica-Cup of Immortality)  award for 10 years of outstanding poetic work in the 21st Century.
Babačić’s impulsiveness from his youth has sharpened with years, his poetry has turned to intimacy, his poetic language has become purer, but the poet’s sharp, unyielding critique of the post-transition everyday has stayed. Nevertheless, between a lyric flicker of thought and a long narrative poem, here and there, a perfect joke finds its place: “The Russians never / run away. / It is too far.”
Translated by Petra Meterc

The Best Score for All
Prepared by Igor Divjak PhD

[1] Behind the Iron Curtain, Babačić and his band Via Ofenziva were the first to venture a public performance of Lilli Marleen, which was strictly banned in the former Yugoslavia as a “Nazi” song.