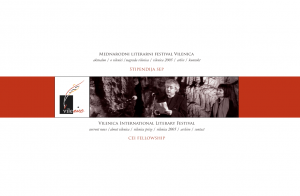 At the 20th Vilenica we played host to poets, prose writers, dramatists and essayists from European countries and beyond with special emphasis on Central Europe. The Vilenica jury advised by the consultants chose men and women of letters from 26 countries. The authors were presented at one of the literary readings and in the Vilenica almanac.

The expert part of the programme was imbued with reflections on the Europe of countless faces in which the issue of culture and literature respectively is being reconsidered. How does the united Europe take care of its spiritual traditions? Is it changing – in the Brussels bureaucratic reality – into a melting pot which levels all differences or is it still true to the multicultural identity which appreciates the peculiarities and searches for a dialogue. Some of the former Vilenica Prize Winners discussed these and similar issues at the round-table discussion themed the possibilities of coexistence of different cultures in Europe and the process of searching a new cultural paradigm, moderated by Aleš Debeljak.

The (in)ability of a cultural symbiosis is particularly evident in the attitude of a majority culture towards the creativity of the minorities. It is on this very relation that the issue of equality of spiritual traditions and languages is being brought into focus and substantiated. At Vilenica, we presented the contemporary literary creativity of the Venetia (Beneška Slovenija), the often-thankless circumstances in which it is born and endures, its peculiarities in relation to the Slovene literature and the role it plays on the contemporary literary and cultural platform. Prof. Roberto Dapit from the University in Udine, Italy and the president of the Cultural Centre Ivan Trinko from Čividale, Italy, Miha Obit embeded the contemporary literature of the Friulian Slovenia into a literary-theoretical and cultural-historical framework. The presentation and the literary reading took place on Friday, 8 September 2005 at 11 a.m. in the Cultural Centre Srečko Kosovel in Sežana where a book exhibition co-organized by the Cultural Centre Ivan Trinko from Čedad was on view.

The future of literatures of smaller nations was the topic of the round-table discussion themed Crosswords of literature: East and West, which took place within the international meeting of organizations promoting literature. The meeting took place on Friday, 9 September at 9.30 a.m. in the Hotel Klub in Lipica. The author of the concept, Gregor Podlogar, hosted guests from various European centres. The issues to be discussed included the promotion of literature in Europe, the role of various institutions, the importance of a nation’s size and its specific characteristics, the effect of recent social changes on the interest of the West in literatures written in the East, and many others. Moreover, cultural centres from Slovenia presented their own experience in promoting their literature abroad, including Slovenia.

At Vilenica two book novelties were presented, namely the Anthology of Slovene Literature, edited by Vanesa Matajc, and a novel by Vilenica 2004 Prize Winner, Brigitte Kronauer. The latter was presented by the Cankarjeva založba publishing house within the Štanjel matinée, when we awarded the Crystal Vilenica and presented the 5th Young Vilenica Award Winner.

Vilenica echoes throughout the year in a number of accompanying events. On 21 May, the Young Vilenica Award was presented in the Vilenica Cave while on 12 July the Slovene Writers’ Association played host to Lithuanian poet, translator, lecturer at Yale and Vilenica 1990 Prize Winner, Tomas Venclova. On 3 October the Cultural Centre Vilenica from Sežana organized a meeting of small publishers.