A luz do sol calada. An anthology of contemporary Portuguese literature 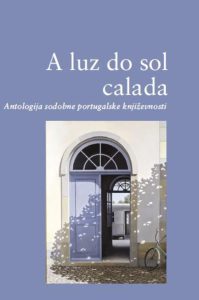 Selected and edited by: Aljaž Koprivnikar and Ricardo Marques

The book will be published with the support of the Slovenian Book Agency, Camões Institute – Camões Instituto da Cooperação e da Língua, I. P., the Ministry of Foreign Affairs of the Republic of Portugal and the General Directorate for Book, Archives and Libraries – Direção-Geral do Livro, dos Arquivos e das Bibliotecas (DGLAB).

A luz do sol calada. An anthology of contemporary Portuguese literature, will bring special attention to the literature of Portugal, about which co-editor Ricardo Marques said:

Portugal is still a metatextual land that likes to think about herself, that thinks about herself in literature that is created somewhere over there, at the seaside or on the top of the mountains, in the city, on the islands or by river estuaries, but has almost always had its back turned to Spain. It seems that the eternal atmosphere of competition that had been entrenched in the Iberian Peninsula for so many centuries somewhat diminished towards the end of the millennium, symbolically overcoming matters through their both joining the European Union (then the European Economic Area) thirty-five years ago, in 1986. It seems that the new millennium has brought new challenges, and other threatening dangers and influences brought by cultural rapprochement and globalisation facilitated by the Internet. Therefore, I am not convinced that the words of the Spanish thinker and aficionado of Portugal, Miguel de Unamuno, still apply to the average Portuguese writer, as they did at the beginning of the 20th century: “The Portuguese are a sad people even when they smile. The literature of these people, even when comical and satirical, is sad literature. Portugal is a people of suicides, a suicidal people. Life has no transcendent sense for them. They may want to live, yes; but for what? Better not to live.”

Excerpt from the foreword to the anthology

By Aljaž Koprivnikar, Slovenian co-editor of the anthology

In the large family of national literatures (in so far as ‘national literature’ is still an applicable concept), Portuguese literature stands on the edge of the European continent and is often far removed from the thoughts of many Slovenian readers, with the exception of those giants of Portuguese and world literature, such as Luís de Camões, Fernando Pessoa and Nobel laureate José Saramago. Yet Portuguese literature boasts a great power built through centuries and it has become part of one of the most diverse European literary currents, with outstanding writers, whose works – 21 for the 21st century – have been selected for this year’s Vilenica anthology.

The selection, which is a dynamic combination of styles and genres, was done by myself, the Slovenian editor, and my co-editor Ricardo Marques, a Portuguese poet, doctor of Portuguese literature and a great friend of Slovenian culture. We sought to present to the Slovenian reader the freshest voices of Portuguese literature, voices who have also been the driving forces of literary development and writing in Portugal in the last few decades. While compiling the anthology, we came to recognise many similarities between Slovenian and Portuguese literature and culture: both societies perceive themselves as a people of writers and poets, sometimes feeling minor or even limited in the European canon, despite producing fresh and powerful literature. Common specific traits of both peoples should not be overlooked, for example almost flawless pronunciation of Slovenian palato-alveolar fricatives and affricates by our Portuguese friends, the indirect connection of Central European melancholy and the Portuguese saudade (although the latter includes the meaning of longing to a greater extent), considerable similarities between the Slovenian figure of kurent and careto, coffee culture, diversity in wines, and a focus on the exterior, on the sea, which has somewhat different connotations with the Portuguese than with Slovenians. Similarities and differences always enrich both sides, with duality (or perhaps dual with us) being typical of the Portuguese culture and soul that is metaphorically split between tradition and contemporaneity.

In Portugal, where they are somewhat set on the past or the remnants of tradition that capitalism buried here a long time ago, the three Fs of Portugal – fado, football, Fatima – have not applied for a while – although, admittedly, they should not be ignored in some cases. The country and its culture have opened wide to the outside world and the world within, deepening a fresh yet culturally recognisable Portuguese character. (With approximately 215 to 220 million native speakers and 50 million L2 speakers, Portuguese has approximately 270 million total speakers. It is usually listed as the sixth-most spoken language andthe third-most spoken European language in the world in terms of native speakers.) Portuguese is the third-most spoken mother tongue in Europe, while literature in Portuguese, including in the former colonies, has been a significant intermediary between different cultures and literary trends. This affiliation is nicely reflected on the cover of the anthology, the work of Portuguese artist Manuel Amad: his painting A porta da estação (Station door, 1986) takes the readers through the doors among the lines and verses making up contemporary Portuguese literature. I am inviting you to step in through these excellent Slovenian translations, and delve into a selection of contemporary Portuguese literature and let go at the crossroads of the winds, of extremes, the openness of the ocean on the one side and the inwardness of the old Continent on the other, which offer every necessary insight into the faraway and perhaps into the unknown.