Zoltán Danyi (1972) is a member of the Hungarian national minority in Serbia, a writer and a rose grower. He was strongly influenced by social events during the breakup of Yugoslavia and the wars that followed, which severely affected many parts of the former state and also Danyi’s immediate homeland. Nevertheless, he remained faithful to life in Serbia and his hometown at all times. He published the novel A dögeltakarító (2015; The Corpse Remover), for which he received the Miklós Mészöly Prize in 2016. 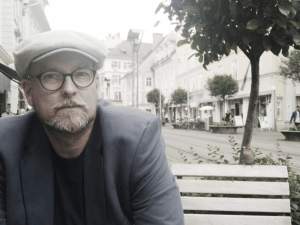 Sandro William Junqueira (1974) was born in present-day Zimbabwe and came to Portugal when he was two years old. He has been engaged in graphic design, while also trying his hand at being a musician, sculptor and painter. He recites poetry and regularly works in theatre as an actor and director, in addition to teaching drama. He is the author of three novels, a collection of poems and several children’s and youth books, including the 2018 book As palavras que fugiram do dicionário (Words That Have Escaped from the Dictionary), which received the Portuguese Writers’ Association award.

Jazra Khaleed (1979) is a Greek poet, translator, performer, filmmaker and boxer, originally from Chechnya. His literature is marked by accusations of fascism, social injustice, police brutality, and racism in modern Greece. He self-publishes his poetry collections, yet he has many readers, as he publishes in many world publications across Europe, the USA, India and Australia. His poems have also been translated into Japanese and even into some Filipino languages. He has presented his short films at several film festivals in USA, Switzerland, Germany, France and Spain.

Larissa Lai (1967) is a Canadian writer, poet, literary critic and a lecturer at the University of Calgary. In her work, she explores the intersections of identity in relation to race, culture, and sexuality. She often draws motifs from Chinese mythology and culture, with a particular emphasis on historical and mythological female figures. Her literature is characterized by a combination of mythological symbolism and images, fantastic and feminist motifs. She has received numerous accolades for her work, including the Astraea Award, the Lambda Award, and also the Lambda Award for lesbian literature.

Álvaro Seiça (1983) is a writer and researcher who lives in Bergen. He holds a PhD in Digital Culture from the University of Bergen, where he conducts research into the poetics and politics of erasure (art of deleting). As a poet, Seiça follows the visual and experimental tradition of Portugal, which he combines with the tradition of northern Europe. His books show various ways of connecting with and extending this direction, while expanding it into digital and electronic areas.

Lena Ruth Stefanović (1970) is a Montenegrin poet, writer, and translator. She studied Chinese language and culture in Beijing and received her PhD in linguistics in 2014 from The Pushkin State Russian Language Institute in Moscow. She graduated from the Gavro Vuković Diplomatic Academy and, among other things, participates in the state protocol of the Montenegrin government as an official translator or consultant. She publishes her texts in various anthologies, many have also been translated into Albanian, English, Azerbaijani, Macedonian and Ukrainian, among other languages. She was a guest at a numerous festivals around the Europe.

Nenad Veličković (1962) is a Bosnian-Herzegovinian writer, poet, essayist, playwright, and university professor. His short stories have been included in several anthologies and published in domestic and foreign periodicals. He is the author of many stage plays as well as screenplays for two television films. He has received several literary awards, including at festivals in Skopje, Svishtov, Plovdiv and Sarajevo. Several of his books, such as Konačari (1995; Tenants), Sahib. Impresije iz depresije (2001; Sahib: Impressions from Depression), Otac moje kćeri (2002; Father of My Daughter), and 100 zmajeva (2007; One Hundred Dragons) are available in translation to Slovenian readers.