“We will not create poems by digging through language. The poem is controlled silence.” 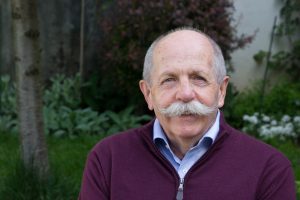 Poet, writer, playwright, essayist and translator Milan Dekleva was born on October 17, 1946, in Ljubljana into a family of Triestine Slovenes. His mother was a pianist, his father an amateur painter; art was thus part of his family life. He graduated in Comparative Literature and Literary Theory at the Faculty of Arts in Ljubljana. He was the co-editor of the student magazine Tribuna, Radio Študent and the Student Cultural Center, and worked as a music teacher and journalist in the cultural editorial board of Ljubljanski dnevnik, where he also edited the literary supplement Svet v knjigah (World in Books). Until retirement, he worked as the editor of the cultural editorial board of children’s and youth programs of RTV Slovenija. Dekleva is a musician, having been a member of the Salamander music group in the 1970s.

He began to write poetry at a young age and he published his first poems at thirteen. During the student movement and the emerging interest in Eastern culture and mentality, he published his first poetry book, Mushi mushi, in 1971; it is considered the first Slovene haiku collection. Then he began to explore various idioms, excelling at picturesque metaphorical and vocal associations (Dopisovanja – Correspondences, Nagovarjanja – Apostrophes) and paradoxical meditations (Zapriseženi prah – Dust Sworn In, Odjedanje božjega – Eating the Divine Away). Afterwards he returned to the origins of European mentality and to Eastern philosophies (Panični človek – Man in Panic, Preseženi človek – Man Transcended), employing music improvisations and folk humour (Narečje telesa – Dialect of the Body, Kvantaški stihi – Ribald Rhymes). As a poet he reveals a holistic view of the world, universe, nature, and man (Šepavi soneti – Limping Sonnets, Jezikava rapsodija – Saucy Rhapsody). The year 2013 saw the publication of Dekleva’s collected and most recent poems under the title Uglaševanje molka (Tuning of Silence), encompassing more than 1300 pages in two volumes and furnished with a hefty bibliography. Since Uglaševanje molka, Dekleva has continued and even intensified his writing of poetry, fiction, essays, and children’s literature.