Nina Dragičević (1984), poet, essayist, composer, author of four books: the novel Who Has Other Concerns (2014), the essay monographs The Famous Unknown (2016) and Among Them is Music (2017) and the poems Love Says Let’s Go (2019). In 2018, she was the first in the history of the Knight of Poetry award to receive both awards – the expert jury award and the audience award. In 2019, the author was in the focus of the City of Women contemporary art festival. The book Love Says Let’s Go was a finalist in 2019 for both the Veronika and the Jenko Awards. 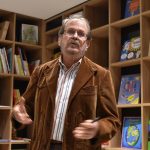 Marko Kravos (1943), poet, writer, essayist and translator. He ran a publishing house in Trieste and was an assistant professor of Slovene studies at the university there. From 1996 to 2000, he was the president of the Slovenian PEN Center and also secretary and a member of the Slovene Writers’ Association board. He has published 27 poetry collections and 16 books for children, and has been translated into 29 languages. He received the Prešeren Fund Award and the Golden Coin for poetry in Celje. His more recent collections are Sol na jezik / Sale sulla lingua (2013, Salt on Tongue), V kamen, v vodo (2013, Into Stone, into Water), Zlato ustje / L’oro in bocca (2017, Golden Mouth), Kot suho zlato (2017, Like Dry Gold), Quattro venti / Štirje vetrovi (2019, Four Winds). 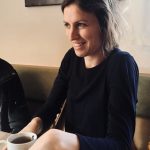 (1986) grew up in Škofja Loka and Stockholm. She prematurely interrupted her studies of art history and sociology at the Faculty of Arts in Ljubljana and switched to the broader field of contemporary dance performative practice. In 2015, the Center for Slovenian Literature published her poetic debut Delta in the Aleph collection, which was nominated for the Veronica Award. At the end of 2018, Aleph also published her second collection of poems, Krog (Circle), which was nominated for the Critical Sieve Award. She received the Jenko Award for it.