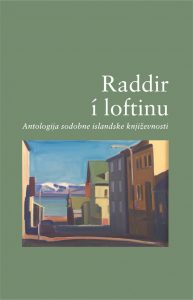 This anthology is published with the support of the Slovenian Book Agency, the Icelandic Literature Center – Miðstöð íslenskra bókmennta and the European Commission.

“Recently, I came upon a wonderful Icelandic word, sorgarfegurð, which describes writers’ difficult position very well. Like German (Icelandic is a Germanic language), Icelandic can create new words by merging existing ones. Sorgarfegurð is a composite of sadness and beauty. I think it is very close in meaning to the Portuguese word saudade, but is even more precise as it refers to yearning something that will never return. Icelanders think that the world is constantly disappearing before our eyes. Our culture is a very good example: it seems it is taking its last breaths every day. Every day when we wake up, we first start reviving the language by writing and speaking it. Writing in Icelandic is not limited to new stories and articles about bringing down capitalist pigs; it literally means breathing life into words every time we use them. We inspire language just like trees and phytoplankton inspire us. The word for inspiration in Icelandic is innblástur. In Latin, this means ‘to breathe in life’. If I or someone else who can also speak these ancient fragile words do not do it no-one will. […] I am very happy that I can introduce several good friends and allies of mine. Writers are voices in the air. To exist, they need someone to listen. I am happy that we have brought several of our literary voices to Slovenia, among another nation with a small population, which, however, is not built from lava, the endless ocean and nyorka but beautiful forest, wolves and – I assume – similar sadness we grow up with. I think you will understand our sorgarfegurð.”

Art continues regardless of the situation; art always finds a way even when everything stops

prepared by Lucija Stupica, co-editor of the Anthology

It took Andri Snær Magnason, the author of this quotation, six years to convince the mayor of Reykjavik (literary meaning ‘smoky bay’) to turn off all city lights for 30 minutes when an astronomer talked about the stars on national radio so the children could admire, watch and find stars in the night sky. Perhaps the starry skies will take them to one of the sagas, to the verses of Icelandic poetry like in the times where they were told in long days without the sun. Just like dreams are said to have taken Slovenian author Svetlana Makarovič to this island far-away, which then enchanted her. Years later, this magic led to her work Saga o Hallgerd.
An attempt to outline the literary landscape that is rather distant in translation has put me in quite a predicament. I am encouraged by the introduction by the Icelandic editor, Sverrir Norland, and particularly his excellent selection of texts. We joked that there are twenty-one writers for the twenty-first century. I am convinced that this is enough to stir our curiosity and prompt us to further explore their literature. Icelanders know how to combine different artistic formats, which is evident from their biographies.
Slovenes quickly feel at ease with Icelanders: they all come from smaller countries with a relatively small number of speakers and we all understand the fragility of sovereignty very well. We quietly meet through differences and similarities. It is said that one in ten Icelanders has written a book although the population barely exceeds the population of the Slovenian capital. Their writers’ society connects some 400 authors, the country has some 40 publishing houses, and readers play a major part in all this. This is not limited to books as traditional Christmas gifts: Icelanders are considered to be among the best readers and buyers of books in the world. They have turned their remoteness to their advantage and have created a recognisable literary world. “We are immensely productive,” the writer Auður Jónsdóttir said in an interview, adding that there are no clear limitations: many authors write poetry, children’s books and novels, often mixing and playing with styles, and experimentation makes the texts uniquely fresh.
It would be naïve to rely on my life situation providing a clearer view. It is true that many translations of Icelandic authors are available in Sweden, one can be familiar with contemporary output and Icelandic authors are regular guests. While it also helps that in addition to English, primary school children must also learn Danish (or another Scandinavian language), Icelanders and Swedes will most likely converse in English. My experience of living on the island helps a bit, as it is related to specific experience. To be closer to feeling dark winter days, or, in the word of the poet Gyrðir Elíasson, “to rest / I pull over myself / dark skies”. And then the white nights, the endless white nights.
I admit that my first greater fascination with contemporary Icelandic art sprung from an exhibition of art by Icelandic international star Ólafur Elíasson at the Stockholm Museum of Modern Art almost a decade ago. His installation revealed another specific trait, which does not seem unusual once one gets to know the island nation: their great engagement in resolving climate issues. Elíasson himself believes – and so do many of our selected authors – that he is part of a greater movement that cannot be ignored any more.
American poet John Ashberry used his poetic language to describe the work of the painter Louisa Matthíasdóttir, who is the author of the picture of the cover of out anthology: “Then there are landscapes of Iceland where she was born and which she has visited regularly through the years. [The painter lived for many years, until her death in New York; author’s note] The land is flat, slated a bit up or down for easy viewing until it hits the water and then the mountains for easy view and then the mountains which block the view, simple and intransient as the wall behind the table in still lifes. Apparently, there are no trees or sfumato in Iceland. The buildings are simple gabled shapes, white with coloured roofs and few if any windows, like the houses in Monopoly. The land is clean, chilly and open. Sometimes two figures stand in the foreground not too close together and casting the long shadows one associates with de Chirico.”
To me, the images unveiled by the seemingly simple paintings are frozen feelings of Icelandic soul, quiet images that merge with all the colours of melancholy with a quiet, persistent voice of the northern island. Stunning inner melody that stays with you. Once an island covered with forests, it is now mostly covered with glaciers and volcanic soils. Green colour, so proudly promoted by Slovenes darkens to become almost black in Iceland. Hot springs, lava fields, waterfalls, cliffs, fiords, moss-covered shores and – last but not least – auks, “the cutest birds, the Arctic type of penguins called lundi in Icelandic. The word rolls over the tongue in a way so befitting the auk’s wide open and beautifully shaped eyes”. (Ana Svetel, ‘How to Measure a Fiord’)
We created this book in strange times. The world had stopped. Suddenly, for a moment, it took us back. After the suspension it is even clearer that everything is in the lines, between the lines, between the verses, and that art continues. Let me invite you to enter the world of contemporary Icelandic literature with the necessary attention and sensitivity. To quote the poet Sigurður Pálsson: “Please, enter / Through the door / Or through the window / As you wish.”