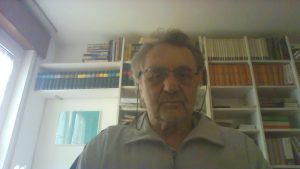 Renato Quaglia (Solbica, 1941) is a Resian poet. He studied theology in Udine and Verona and was ordained a priest in 1965, but gave up the profession after four years. He studied psychosociology at the Lumen vitae International Institute and at the University of Leuven, and has been engaged in reviving economic, national, and spiritual life in Resia since the early 1970s. His ethnological and anthropological research is important, especially the extensive monograph Mi samo izde, ti ke baj si? (2007; We are here, where are you?). He writes in Resian and Italian. Among Renato Quaglia’s most important books are the poetry collections Baside / Besede (1985; Words) – for which he received the Prešeren Fund Award in 1986 –, Rezija naša (2008; Our Resia), Sanjalavi / Indizi (2018; Signs), Čütja / Presagi (2018; Premonitions) and Zaleni okrišiji / Zelene krošnje (2021; Green Canopies), as well as a collection of essays, Rezija. Jezik zemlje, jezik kruha (1981; Resia: The Language of Earth, the Language of Bread). In addition to Silvana Paletti, Renato Quaglia is the central poetic voice of Resian, the Solba dialect spoken by just over a thousand people in the eastern Alpine valley in northern Italy today. 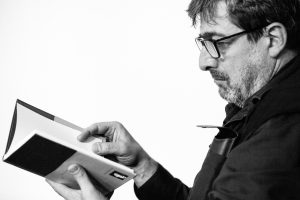 Ivo Stropnik (Celje, 1966) is a poet and writer, editor of the Velenje Book Foundation, head of the international literary festival Lirikonfest Velenje, initiator and long-term organizer of the international Pretnar Award, The Academy Poetic Slovenia, the Velenjica – Cup of Immortality poetry award, the Lirikonov Zlat distinction for translations and essays, Winged Turtle Award for travelogues, the writers’ and translators’ residence in Velenje, the editor of the Rp. Lirikon21 festival anthologies, etc. To date, he has published eighteen books, including twelve poetry collections for adults, selections of which have appeared in magazine, festival, and anthology translations. These include Zlati metulji (1983; Golden Butterflies), Redčena konjenica (1991; A Thinning Cavalry), Podtalnica (1991; Groundwater), Skrivalnica v očesu (1993; The Hideaway in the Eye), Lastna imena mojega doma (1997; The Proper Names of My Home), the five-book collection Slovarjenje melanholije in radoživosti – Rosa ni pozabila name (1997; The Growing Dictionary of Melancholy and Joyfulness I–V: The Dew Did Not Forget Me), Daljave (1998; Distances), Triangel (2001; Triangle), Nate mislim, votlina v glavi (2006; I Think of You, Cavity in My Head), Knjiga šumov (2009; Book of Noise), XXXL: Velike ljubezni (2012; XXXL: Large Loves), and Od anusa do želve (2020; From Anus to Tortoise).