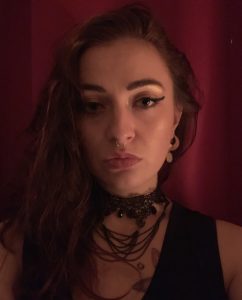 Katia Sophia Ditzler (Berlin, 1992) is a Russian-German interdisciplinary artist who works and creates at the intersections of poetry, music, video, performance, and digital media. She studied creative writing and cultural anthropology (Indology, Tibetology, and Mongolian Studies) at the University of Leipzig, film, Ukrainian and philosophy at the Taras Shevchenko University in Kyiv, translation and Russian literature at the Maxim Gorky Literature Institute in Moscow, Indonesian Gamelan music, shadow puppetry, and Javanese dance in Yogyakarta, and dramaturgy in Berlin. After residing at the Institute for Theatre Research in Melbourne, she now lives and works in Berlin. She publishes in magazines and anthologies, creates film footage and performances for festivals. In her current experiments, she is exploring political mythology and mechanisms of propaganda in the context of the military conflict between Ukraine and Russia.

Dejan Dukovski (Skopje, 1969) is a Macedonian playwright and screenwriter. He graduated in dramaturgy at the Faculty of Dramatic Arts (FDU) in Skopje, his mentor being Goran Stefanovski. There he also lectured at the Department of Film and Television Screenwriting, and since 2015 he has been a playwright at the Macedonian National Theater in Skopje. His texts have been translated into many languages, staged in various theatres, and he has received several awards for them at domestic and international theatre festivals. Among his most notable dramatic texts are Последниот балкански вампир (1989; The Last Balkan Vampire), Силјан штркот шанца (1991; Siljan the Stork), Балканот не е мртов (1992; Balkan is Not Dead), Буре барут (1994; The Powder Keg), Маме му ебам кој прв почна (1996; Screw the One Who Started It), Друга страна (2003; Other Side), Празен град (2007; Empty City), Утерус (2009; Uterus), Изгубени Германци (2011; Lost Germans) and Духот што оди (2014; The Spirit Who is Walking). Dukovski is also the author of several screenplays, including Светло сиво (1993; Light Grey), Буре барут (1995; The Powder Keg), Како во лош сон (2003; As in Bad Dreams), and Ѕвонење во глава (2002; Headnoise). The film The Powder Keg, directed by Goran Paskaljević, won awards at the Venice International Film Festival (1998), the European Film Academy Award for best film, along with other awards.

Kätlin Kaldmaa (Voore, 1970) is a writer, poet, translator, literary critic and publisher. Since 2010, she has been the president of the Estonian PEN Centre, and in 2016 she was elected Secretary of PEN International. She has published four poetry collections, two short prose collections, a novel and four youth books; she also writes essays and autobiographical works. She translates from English, Finnish and Spanish into Estonian. In 2020, her poetry collection The Alphabet of Love was published in Slovenian, with selected poems translated from English by Bojana Vajt. 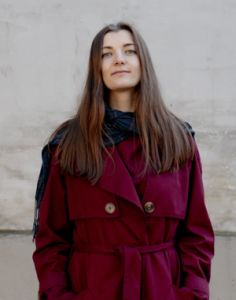 Hanna Komar (Baranavichy, 1989) is a Belarusian poet, writer, translator, and activist. She studied English in Minsk. So far, she has published three books: the poetry collection in Belarusian Страх высоні (Minsk, 2016; Fear of Heights), the bilingual (Belarusian-English) collection Recycled (London, 2018) and also the bilingual (Belarusian-Russian) collection of documentary poetry Мы вернемся (2022, Moscow; We Will Return). Together with Yuliya Tsimafeeva and Natalia Binkevich, she compiled and translated a collection of poetry by Charles Bukowski, Святло, і паветра, і месца, і час (Minsk, 2017; Air and Light and Time and Space). She also translates her own poetry into English. In her early poems, she revealed the experience of a girl and a young woman growing up in a strongly patriarchal society; with deep sincerity she urges women to recognize the shackles that men impose on them. In the years 2020–2022, she participated in the Belarusian protest movement, and though her texts became stridently political, they remained emotional and sincere. Hanna Komar attended a residency for young authors in Vilnius (2015), a residency at the Baltic Center for Writers and Translators in Visby (2021), and received a Chevening Fellowship to pursue a Masters in Creative Writing at the University of Westminster in London. She is a member of the Belarusian PEN and the Union of Belarusian Writers, as well as an honorary member of the English PEN.

Igor Kotjuh ( Võru, 1978) is a poet, publisher and organizer of literary events who has Ukrainian roots. He writes mostly in Russian, which is his native language. He has published five poetry collections, for three of which he received the prize of the Estonian State Fund for Culture for the best book of the year written in Russian. He is the founder of the publishing house Kite, where he works as an editor, a member of the organizational committee of the Tallinn literary festival HeadRead, and the founder and editor of the Estonian–Russian literary portal Oblak (www.oblaka.ee). He is employed as an Estonian teacher at a primary school. 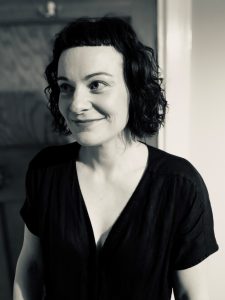 Gail McConnell (Belfast) is a Northern Irish poet and lecturer of English at Queen’s University Belfast. She explores the themes of the living and the dead, violence, eccentricity, and the possibilities and policies of language and form. She has published the poetry collections Fourteen (2018), Fothermather (2019), The Sun is Open (2021) and the book Northern Irish Poetry and Theology (2014), about the poetry of Seamus Heaney, Michael Longley, and Derek Mahon. The book The Sun is Open is a shake-up of public and personal archival material about the life and work of the poet’s father, who was killed in front of her eyes by the IRA in 1984. By juxtaposing the voice of a child and an adult, the past and the present, the author tries to decipher fragments of remains and reassemble them into history and life. The book was nominated for the John Pollard Foundation International Poetry Award and the Christopher Ewart-Biggs Prize. The Times Literary Supplement and The White Review named it book of the year, and The Observer named it poetry collection of the month.

Kristian Novak (Baden-Baden, 1979) is a Croatian writer, linguist, and university professor. He grew up in Međimurje. He studied German and Croatian, and in 2011 received his doctorate in linguistics. He taught linguistics in Rijeka, and since 2021 he has been employed at the Department of German Studies at the Faculty of Arts in Zagreb. Between 1996 and 2009, he won several European and world medals as a karateka and a member of the Croatian national team. So far, he has published three novels: Obješeni (2005; The Hanged), Črna mati zemla (2013; Dark Mother Earth) and Ciganin, ali najljepši (2016; Gypsy, But the Fairest of Them All, 2020). For his second novel, he received the Tportal Prize for Croatian novel of the year, and Večernji list ranked it among the ten best Croatian novels of the last fifty years. A feature film is planned based on the novel Dark Mother Earth; it is expected to follow Rok Biček’s short film Penalty Shot (2021), which had its world premiere at the Locarno Film Festival and the Slovenian premiere at the Festival of Short Film Fekk. A miniseries is planned based on his novel Gypsy, But the Fairest of Them All. 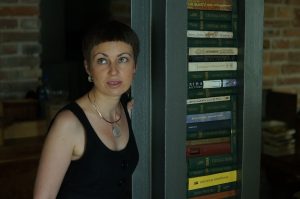 Natalka Sniadanko (Lviv, 1973) is a Ukrainian writer and translator. She studied Ukrainian language and literature at Ivan Franko University in Lviv and Slavic and Romance Studies at the University of Freiburg. As a journalist and editor, she contributed to numerous domestic magazines and newspapers, as well as to the media in the West (Gazeta Wyborcza, Süddeutsche Zeitung, Neue Zürcher Zeitung, New York Times, New Republic). She is a translator of prose and plays from German (Franz Kafka, Friedrich Dürrenmatt, Günter Grass, Max Goldt, Martin Pollack, Elfriede Jelinek, Herta Müller, Lukas Bärfuss), Polish (Zbigniew Herbert, Czesław Miłosz, Johanna Bator), and Russian (Andrej Kurkov). She has published a collection of short prose, Сезонний розпродаж блондинок (2005; Seasonal Sale of Blondes), and the novels Колекція пристрастей (2000; The Passion Collection), Чебрець у молоці (2007; Thyme in Milk), Країна поламаних іграшок та інші подорожі (2008; Land of Broken Toys and Other Travels), Гербарій коханців (2011; Herbarium of Lovers), Фрау Мюллер не налаштована платити більше (2013; Frau Müller Does not Wish to Pay More), Перше слідство імператриці (2021; The First Investigation of the Empress) and others. In 2011 she received the Józef Konrad-Korzeniowski Ukrainian Literary Prize. 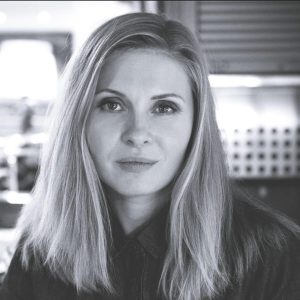 Tatiana Țîbuleac (Chișinău, 1978) is a Moldavian-Romanian writer. She studied journalism and communication studies at the State University of Moldova in Chișinău. For some time, she worked as a television reporter and presenter of news programs on the Chișinău independent television PRO TV and was working for Unicef. In 2008, she moved to Paris, where she has lived ever since. Tatiana Țîbuleac’s literary debut was the collection of short prose Fabule moderne (2014; Modern Tales). For her second book, the novel Vara în care mama a avut ochii verzi (2017; The Summer When My Mother’s Eyes Were Green), she received an award from the Writers’ Association of the Republic of Moldova and an award from the Observator cultural magazine. The book has been translated into French, Norwegian, German, Polish, and Spanish; the latter translation (2019) received the Casino de Santiago European Novel Award. For her second novel Grădina de sticlă (2018; The Glass Garden), the author received the EU Prize for Literature; it has been translated into French, Spanish, and Bulgarian, and a translation into Slovene is being prepared. Tatiana Țîbuleac received the State Prize of the Republic of Moldova for her literary work.