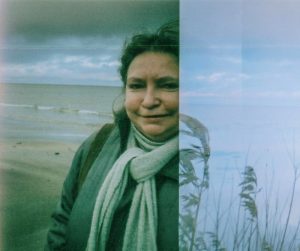 Latvian poet, writer and translator Amanda Aizpuriete was born on March 28, 1956, in Jūrmala. She studied linguistics and philosophy at the University of Latvia in Riga and at The Maxim Gorky Literature Institute in Moscow. She was a radio journalist, poetry editor at Avots magazine, and a contributor to Karogs magazine. She has taught courses at the Literary Academy at the Latvian Writers’ Association.

She began publishing poetry and essays in 1976, when her first poems were published in the literary magazine Literatūra un Māksla. She translated into Latvian the poetry of Anna Akhmatova, Joseph Brodsky, Nikolay Gumilyov, Uwe Kolbe, Georg Trakl, Taras Shevchenko and other authors. She has translated some 30 books from English and German, including Ken Kesey’s novel One Flew Over the Cuckoo’s Nest, Virginia Woolf’s Orlando, Franz Kafka’s The Trial, Jack Kerouac’s The Dharma Bums, Francis Scott Fitzgerald’s The Great Gatsby, and John Maxwell Coetzee’s Disgrace. In addition, she has compiled and published several anthologies of Latvian poets.

Amanda Aizpuriete’s poetry has so far been published in at least fourteen languages, including English, Finnish, German, Lithuanian, Russian, and Swedish. Her novel The Night Swimmer was published in Lithuanian translation, and in the 1990s, three of her poetry collections, translated by Manfred Peter Hein, were published by Rowohlt publishing house in Germany.

In 1999, Amanda Aizpuriete received the Horst Bienek Prize for Poetry awarded by the Bavarian Academy of Fine Arts. In 2000, she was among the three authors representing Latvia in the international project The Literary Express. She received a literary prize for the translation of a selection of poetry by Anna Akhmatova (2003), the Ojārs Vācietis Literary Prize for her poetry collection There, and the Dzintars Sodums Prize for her collection Before Leaving.

Laudation
Prepared by Aljoša Harlamov, president of the Vilenica Jury

Amanda Aizpuriete is a Latvian poet, writer, essayist, and translator of Jewish and Roma origins. She belongs to the generation which stepped in with its poetry in the mid-seventies and took an active stand against the double morality of the Latvian or Soviet society. Her poetry spoke openly and unsparingly about the unpleasant aspects of life as it was then and broached many taboo themes. Most of all, it revealed the lives of women in a largely patriarchal and socially difficult environment. The poet’s motifs mainly spring from life’s concreteness, from the pictures of life on the shores of her hometown, from events which are everyday and ordinary only on the surface because according to her there is nothing that could be called ‘everyday’ or ‘normal’. Human life in her poetry is full of unexpected, complex situations and emotions: under the surface of mundanity there is a cataclysmic simmering of the mystic light of love, poetry, and death which irradiates our lives. Her lyric persona is thus constantly beset by doubts, fears, and hopelessness, which is connected with her feelings of deception in love relationships, loss of intimacy, loneliness, and solitude.

This attitude to the world was reinforced in the nineties after the collapse of the Soviet Union, Latvia’s acquisition of independence, and the economic crisis in the Baltic states, when daily life grew even harsher and literature and art in Latvian society had to give way to the struggle for survival. The attitude was reinforced, even though Amanda Aizpuriete’s literature staunchly bore witness to the new reality as well, lamenting it with her poet’s sensitivity, and even though she was becoming an internationally well-known poet, especially after the publication of two selections from her poems in German. In our century her poetry acquired a somewhat softer tone of elegiac melancholy, while her poetry language became strikingly magical, existentially potent yet fragile. Her collection Bābeles nomalē (Outskirts of Babel) juxtaposes communication misunderstandings between different languages arising in a crumbling, increasingly postmodern world with the misunderstandings between two lovers who talk past each other, each in their own language.

Amanda Aizpuriete’s poetry is steeped in a constant overlap of history and intimacy, which form an atonal harmony. According to Veno Taufer, the pioneer of translating her poems into Slovene, ‘her laconic and precisely worded lyric poetry blends resignation and irony in the moments of sharpened life experience’. The poetry which has accompanied the world’s tectonic shifts since the seventies, reaching beyond the end of history, has not outlined merely the author’s autobiography – indeed, this interpretation has more than once been rejected by the author herself: ‘What is important is our common world, not mine alone. I do not write about my own experiences; those are the experiences of someone else. I believe that most writers are mediums. That means that I cannot fully determine where something comes from or what it means. I don’t know and I don’t want to know either.’ And if poetry comes from the unknown, from a space which transcends a single ego – the author’s – she experiences in the creation of poetry, time and again, a moment of decision: ‘To write or not to write – that is the only difference.’ In this seemingly trivial decision, the decision for writing, for poetry, she is joined by the jury of this year’s Vilenica Festival. The decision to confer the Vilenica International Literary Prize on Amanda Aizpuriete is certainly a decision in favour of the power of poetry, her poetry, and her unique poetic voice.