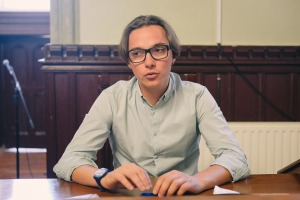 About the CEI Fellowship for Writers in Residence

Since 2006 the CEI Fellowship for Writers in Residence has been presented by the Central European Initiative in collaboration with the Slovene Writers’ Association, as part of the Vilenica Festival. The Fellowship seeks to encourage cross-border cooperation and promotion in the field of literature for young writers from Central European Initiative member states that are not members of the European Union. The Fellowship, which is endowed with a cash award of 5,000 EUR, is intended to be used for a three-month residence in any CEI member state of the candidate’s choice. During this period the author is expected to work on the project indicated in the application form.

The recipient of the Central European Initiative Fellowship for the year 2017 is Andriy Lyubka from Ukraine.

Andriy Lyubka, a poet, writer and essayist, was born in 1987. He graduated from Mukachevo Military School, Ukrainian philology at Uzhgorod University, and Balkan studies at the University of Warsaw. He is the author of three books of poetry, a collection of short stories and a book of essays. In 2007 he received the Debut prize and in 2011 the Kyiv Laurels prize. He is also a translator from Polish, Croatian, Serbian and English and the curator of two international poetry festivals. He lives in Uzhgorod.

From the committee’s justification:

Andriy Lyubka is among the top young poets and writers of Ukrainian literature and he is a most promising European creator. He has received several literary awards and stipends, he has been translated into a number of languages, and he is highly engaged in the promotion of Ukrainian and European literature: working in several genres, he also translates from several languages.
In Lyubka’s opus to date – in poetry, essays and prose – he has shown a great sensitivity for the peripheral landscapes of European culture, from Ovid’s times forth. These may be the twilight regions of our consciousness, yet they are startlingly creative. They reflect the ambitions of artists to promote values ​​that are vital to “Europeanism.”
Lyubka’s book plan has Ovid as a metaphorical link between Western and Eastern Europe, which represents a creative challenge for him. And that is precisely what proved convincing to the jury members. Lyubka is aware that the borders between traditions and languages ​​are but a confirmation that we breathe the same air, settle the same shores, in the awareness and preservation of identity divisions between cultures. On many boats of literary works, however, there is a cargo that must be brought to the ports of other languages ​​and cultures.
A further project emphasis is that Vilenica / Slovenia – the place of the writer’s residence – is a crossroads of heterogeneity within a common European identity, reflecting a bold and perspicacious starting point.

International jury members for the CEI Fellowship for 2017: