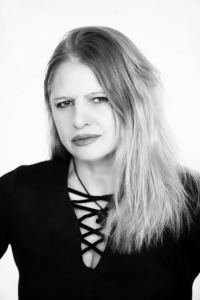 Mojca Kumerdej was born in 1964 in Ljubljana, where she also studied and received a degree in Philosophy and Sociology of Culture from the University of Ljubljana’s Faculty of Arts. In addition to literary writing, she has been following contemporary dance, theatre, performance and intermedia arts as a publicist and an art critic since the 1980s. As a dramaturge, she occasionally works on contemporary dance and drama. As a freelance contributor to the Sobotna priloga supplement of the Delo newspaper, she writes about art, science, and culture.
Considered one of the most visible voices of Slovene postmodern literature today, Kumerdej started her literary career in 2001 with the short novel Krst nad Triglavom (The Baptism Over Mount Triglav), in which she addresses Slovene cultural and national myths with irony. Two short story collections marked by a different authorial approach followed: Fragma (2003) and Temna snov (Dark Matter, 2011). The stories, depicting what seem to be quite usual individuals at first sight, gradually reveal a crack that makes way for human vulnerability, fears, or other sorts of pathology. Fortunately, the author does not renounce irony and black humor, which in places slightly tone down the dreadful tension and the anxious atmosphere that are both characteristic of her stories. Being very skilled in doing so, she, unlike other writers, does not need to “resort” to explicit descriptions of cruelty. She also follows this paradigm in her short story “Angel varuh” (Guardian Angel) from the collection Fragma, published in this anthology. The entire collection will be published in English this autumn by the American publishing house Dalkey Archive Press in Rawley Grau’s translation.
Mojca Kumerdej’s latest work, the contemporary philosophical-historical novel Kronosova žetev (The Harvest of Chronos, 2016), takes place during the transition from the 16th to the 17th century, when the territory of today’s Slovenia saw a wrathful religious and political battle between Protestants and Catholics. The novel turns to the past for a better understanding of the present and the future. Well received among critics and readers alike, Kronosova žetev was awarded the Prešeren Foundation Award, Slovenia’s highest award for artistic achievement, the Kritiško sito Award, awarded by the Slovene Literary Critics’ Association, and the author was among the five writers shortlisted for the Kresnik Award for the best novel of the year 2017.
Mojca Kumerdej’s fiction is included in several Slovene and foreign anthologies and has been translated into many languages. Besides the already-mentioned awards, she also received the Crystal Vilenica Award in 2006 for her short story “Pod gladino” (“Under the Surface”, from the collection Fragma), and she was the first foreign author to receive the Serbian and Bosnian-Herzegovinian Kočić’s Pen Award for the short story collection Dark Matter (in Serbian Tamna materija, transl. Ana Ristović). She is a regular guest of literary festivals and book fairs in Slovenia as well as abroad (Germany, Austria, Serbia, Mexico).
It is understood that fiction that deals so uncompromisingly with the anomalies of our time can evoke diverse, often painful emotions. The author herself is well aware of that, claiming: “Art, in contrast with culture as a wide field of verified content and approaches, involves risk and means entering the unverified and the unknown. With literature, I wish to open intimate and universal worlds from different angles, to shed light especially on the shaded, less visible images, and to give utterance to our own voices, stirring unease.”