From the laudation by Andrej Blatnik: 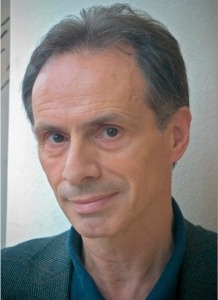 He has translated into Serbian many books, stories, poems, and essays by such American, British, Australian, and Canadian authors as Saul Bellow, Vladimir Nabokov, Margaret Atwood, Isaac B. Singer, Thomas Pynchon. Furthermore, he has edited a number of magazines and book series. He resides in Calgary, Canada, since the autumn of 1994. His books are translated into more than fifteen languages: the Slovenian translations comprise a short story selection, Words Are Something Else (Besede so nekaj drugega, Aleph 2007), and the novel Bait (Vaba, Cankarjeva založba 2008).
Albahari is one of the most distinguished and influential prose writers of former Yugoslavia, a fact confirmed by his numerous literary awards.His collection Description of Death won the Ivo Andrić award in 1982, another collection, Cloak, won the Stanislav Vinaver and Branko Čopić awards, andhis novel Bait won the prestigious NIN award for the best novel of the year in 1996. Another novel,Leeches, won the Belgrade City Prize. Albahari has also received the award of the National Library of Serbia and two international prizes, the Balcanica Award and the Berlin Bridge Prize. As early as 1996/97, a ten-volume selection of his work was published by Narodna knjiga.

The generations of writers who emerged in the early 1980s to reshape the prose then dominant in the languages of former Yugoslavia received their aesthetic justification in Albahari’s short storyMute Song, which neatly encapsulates the contemporary conflict between ‛reality’ prose and ‛different’ prose. A mere handful of pages includes and masterfully interweaves a stereotypical scene of phallocratic domination, the academe’s confrontation with its intellectual powerlessness, and, finally, the mystery of transcendence inaccessible to reason. Thus it comes as no surprise that Albahari used the phrase Mute Song as the title of his 2009 personal anthology as well. Moreover, it is by citing the conclusion of this particular story that Aleš Debeljak concludes his own book, Balkan Bridge (Balkanska brv), thus providing a Slovenian homage to Albahari. And Albahari’s influence in the territory of former Yugoslavia is not restricted to the generation now in their fifties, as is attested by the work of Muharem Bazdulj, fifteen years his junior, and by still younger writers. Indeed, the wave of popular, Saturday, other, different stories in recent Slovenian literature may be a (conscious or not) response to Albahari’s ordinary stories (Obične priče) from 1978. Not surprisingly, Albahari named his 1999 collection Unusual Stories (Neobične priče): writing ‛ordinary’ stories, to borrow the more familiar language of another, non-literary culture, is today nothing short of a Mission Impossible.

The space which Albahari was entering in the late 1970s and early 1980s was quite different. What was appreciated then was reality prose, the aesthetics of tough marginals, street-wise survivor types, who spoke a robust idiom, were past masters in the language of fists, and – at least by night, if not by day – mastered the most beautiful girls as well. This prose code, which a more layered society might have relegated to a genre rather than to canonical prose, is perhaps best represented by the pinnacle of the literary context in question, the novel When Pumpkins Blossomed (Kad su cvetale tikve) by Dragoslav Mihailović. Before Albahari’s arrival, the only prominent representative of a different aesthetic path in Serbian prose, a path where the ethical scale was necessarily different and the victory of brute force did not supplant all other values, had been Danilo Kiš. It is no coincidence that both Kiš and Albahari were backed by a Jewish tradition of family and culture, which helped their individual voices survive in their euphemistically called ‛voluntary exile’ – except that theirs was not an exile to the new promised land, North America, but to the traditional refuge of non-conforming artists, Paris. (The clash between reality prose and metafictional techniques is attested by a precious collection of documentary evidence, Is Kiš to Be Burnt?

[Treba li spaliti Kiša?], while Albahari’s attention to Kiš, his many intratextual compliments, or, say, the narrator’s attitude to a parent’s fate in Albahari’s Bait as compared to Kiš’ Garden, Ashes [Bašta, pepeo], might form the subject of interesting monographs.)

Albahari’s prose is marked by changes and blanks. The very titles of his books reveal the polarity of his writing – if the titles of story collections largely revolve around the form, that is, around thekind of story (from ‛ordinary’ to ‛unusual’), its mode (‛simplicity’), and its subject, the titles of novels often feature an individual, who is schematically defined through a relationship (brother, daughter), name, or activity. Much is left unsaid, left for the reader to puzzle out. Rather than served everything on the narrative platter, the reader is continually forced to overstep boundaries and fill in gaps – forced not only by intratextual means of expression but also by Albahari’s choice of context. It was as early as the first half of the 1980s, at a time when socialism (particularly in Serbia) was barely beginning to thaw, that he introduced hash vocabulary into his writing and urban popular culture into his characters’ lives. All those who candidly label him as an apolitical author should realise that Albahari had campaigned for greater liberty even before Yugoslavia began to crumble, joining the vanguard of the marijuana legalisation movement in the late 1980s. And those who find such commitment too partial should read Albahari’s story The Right of the Stronger (Pravo jačeg), here quoted in full, since its point transcends the limitations of time and space: ‛A boy steps out into the back yard with a slice of bread in his hands. The bread is spread with forest fruits jam, and the boy is savouring the taste in anticipation. But in the back yard he is approached by a boy from the third floor, older and stronger, who plucks the bread from his hand without saying a word. He takes a bite, frowns, and spits. Ugh, forest fruits! he says, tossing the bread down on the ground, in the dust.’

The prose of change did not try to avoid changes. The wars in former Yugoslavia drew many demarcation lines, not least in Albahari’s writing. If the short prose pieces from his early books show him as a master of aposiopesis, of portraying reality through descriptions of blanks and silences, his more recent books, roughly from Bait (1996) onward, search for the meaning of a writer’s activity, a self-questioning that had earlier been conveyed through measured self-irony (which is indeed directed at the point of all writing; the devotees of writing should regularly re-read his prose miniature, Peter Handke). This may well stem from the collective Yugoslav experience, but even such recent texts do not define guilt or sin with the precision desired by many readers of today, unwilling to make ethical decisions and judgments, for Albahari has no intention of doing the readers’ task for them.

When the war is over, the mother in the novel Bait tells her two children that they are going home. The children imagine that they will go back to living where they lived before, but the mother’s image of ‛home’ is vague. She does not know whether the city of ‛before’ still exists, and even if it did, she would no longer return to it. ‛Home’ is an empty signifier without a signified. Asked where the mute song comes from, the old man in Mute Song who knows its secret laughingly counters: ‛Nobody knows where it comes from.’

And this is not the last place of ontological doubt thematised in Albahari’s writings. ‛Why invent characters, when I am not even sure that I know who I am myself?’ the writer said once. Inquiry into identity is always an inquiry into borders, belonging, transit and departure. An apatride is not just one who has to leave his homeland: indeed, this departure may actually be easier if the homeland proclaimed in your ID does not fit the tradition of your family, culture, perhaps religion. An apatride is also one who writes in the only homeland left to him, language, so very differently that he has few or no sympathisers in it.

With his transit from 1990s Serbia to 1990s Canada, David Albahari may have passed from one kind of homelessness to another, but his book publications and editorial work have built a homeland for many other writers, literary loners who had arrived at a literature site fostered by a different cultivation. And when the American anthropologist of Mute Song realises that non-existence is a fundamental human truth, her initials, discreetly carved in the reading room desk, begin to glow: the self is established by a renunciation of egocentrism. She is no longer headed just for Belgrade, where she recognises ‛what it is to exist on the border between East and West yet belong to neither, to be neither the one nor the other’; she is also on her way to joining the singers of the mute song, those who know how to renounce their selves in order to forge links with others.

‛Beauty is the cloak on the back of the world,’ says the narrator’s wife in the story Cloak. If much contemporary prose seeks to spread a cloak over the world we actually live in, Albahari’s writing, with its incompletions and silences, draws such covers aside – peeling life like an onion down to its ever elusive core, where the mute song begins. David Albahari is one of its rare masters.