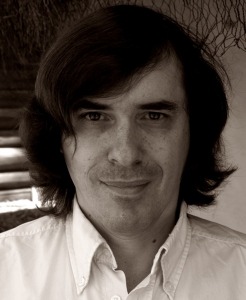 Mircea Cărtărescu was born in 1956 in Bucharest, Romania. In 1975, he graduated from Dimitrie Cantemir High School in Bucharest, and in 1980 from the Faculty of Letters at the University of Bucharest. Between 1980 and 1989, he taught Romanian language and literature at high school level, later on found employment with the Romanian Writers’ Union (1989), and acted as the editor of the Caiete critice literary magazine between 1989 and 1990.
In 1991, he became a lecturer at the Department of Romanian Literary History at the Faculty of Letters at the University of Bucharest. In 1999, he received his PhD after successfully completing/defending his doctoral thesis titled Postmodernismul românesc (Romanian Postmodernism). He was a visiting lecturer at the University of Amsterdam between 1994 and 1996, and at the University of Vienna in 2005. Between 2009 and 2010, he taught a Samuel Fisher Course at the Freie Universität in Berlin. Today, he is an associate professor at the Faculty of Letters, the University of Bucharest.
Mircea Cărtărescu is a poet, novelist, essayist, translator, literary critic, and journalist. He is a member of the Romanian Writers’ Union, the Romanian PEN Centre, and the European Cultural Parliament. So far he has published numerous articles as well as more than 20 literary works. His works, which he began to publish in 1978, have been translated into 16 languages.
He has made his mark as a prolific and prominent member of several important Romanian literary movements, such as the 80’s Generation, the Blue Jeans Generation, and the Romanian Postmodernist Movement.
Mircea Cărtărescu has also been the recipient of several grants and fellowships, among them the Iowa International Writing Program Fellowship (1990), the fellowship of the New Europe College in Bucharest (1995), the Rockefeller Foundation Grant in Belaggio, Italy (1997), the Anna Kruger Grant in Berlin, Germany (2000), the Hungarian Collegium Budapest Fellowship (2000), and the DAAD grant in Berlin, Germany (2001). He was also chosen for a one year residency courtesy of the Akademie Schloss Solitude in Stuttgart, (2006), for which he acted as a juror in 2009.
He was officially invited to attend the Frankfurt and the Leipzig Book Fair in Germany as a literary guest in 1997 and 1998. He has also been a guest of honour at literary evenings in Rome, Pisa, Florence, Naples, Stockholm, Berlin, and Aarhus. In 2005, he took part in the “Les belles étrangères” of the Centre National du Livre (National Book Centre) in Paris, France.
In 2007, he went on promotional tours through Sweden, Italy, Germany, Austria, Switzerland, and Poland. In 2008, he was a guest at the Leipzig Book Fair, the Göteborg Book Fair and the Torino Book Fair, while also being featured as the special guest at the “Literatur im Herbst” festival in Vienna the same year. He toured Sweden in 2009 and Austria and Germany in 2010, holding readings in Salzburg, Dresden, Berlin, and Esslingen. The same year he also held readings in Stavanger, Norway and The Hague in The Netherlands.
In 2006, the President of Romania Traian Băsescu decorated him with the Grand Officer Title for Cultural Merits.
Mircea Cărtărescu lives and works in Bucharest.

Mircea Cărtărescu has received a number of prizes for his literary achievements in poetry, prose and the essay. His most important awards include: