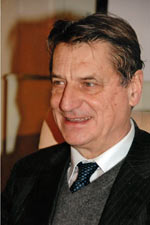 Claudio Magris was born in the Italian city of Trieste in 1939. The Italian writer, essayist, columnist, translator and playwright completed his graduate studies at the University of Turin and at several German universities before being appointed full professor at the Universities of Trieste and Turin. Moreover, he has received honorary doctorates from many distinguished European universities. Throughout his career Magris has spread the awareness of the Central European culture and the Habsburg myth in his home country, reevaluating the influence of the Hebrew heritage on the Central European tradition. In fact, thematising the multiculturality of the European history in Danubio (Danube), his magnum opus, won him his first major breakthrough and was translated into twenty-four languages. Apart from winning worldwide acclaim for his awarded essays, novels and plays, Magris has also distinguished himself as a translator of Ibsen, Kleist, Schnitzler, Büchner, and Grillparzer. Furthermore, in the years 1994-1996 he served as a member, a senator, of the Italian Parliament. Subsequently to his entry into the Italian political arena, he held the European Chair at the Collège de France between the years 2001-2002. In 2007 he was appointed honorary professor at the University of Copenhagen. Claudio Magris is also a member of various Italian and foreign academies: Deutsche Akademie für Sprache und Dichtung in Darmstadt, Österreichische Akademie der Wissenschaften, Accademia delle Scienze di Torino, Ateneo Veneto, Akademie der Wissenschaften in Göttingen, Akademie der schönen Künste München, Akademie der Künste Berlin, Accademia dei Lincei; and holds a number of honorary titles: Chevalier dans l&39;Ordre des Art et Lettres de la République Française, Björnsonorden Den Norske Orden for Litteraere Fortjenester, Officer de l&39;Ordre des Art et Lettres da la République Française, Cavaliere di Gran Croce della Repubblica Italiana 2001, Commandeur dans l’Ordre des Arts et des Lettres de la République Française 2004. His essays and columns have been published in Corriere della Sera as well as in other European journals and newspapers.