The CEI Award for Young Writers is promoted by the Central European Initiative (CEI) and the Slovene Writers’ Association (SWA) within the Vilenica International Literary Festival. The Award aims at promoting the young generation of writers and supporting the circulation of their literary works through the translation in the languages of the CEI countries. The Award envisages the translation of one of the awardee’s works into Slovenian and the translation into another CEI language of the candidate’s choice. Additional translations could be explored for the future editions of the Award. 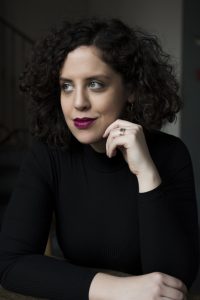 The jury for the CEI Award for Young Writers for 2022 – consisting of Aljoša Harlamov, Aljaž Koprivnikar, Jaruška Majovski, Tanja Petrič and Suzana Tratnik – have granted the award to Luiza Bouharaoua from Croatia.

Luiza Bouharaoua is a writer, translator, and cultural worker. She is the founder of NGO the Scribonauts that has been developing and implementing artistic programs for marginalized groups, primarily children and youth in children’s homes and adults in prisons and penitentiaries across Croatia since 2011. She has been running a book club and a creative writing workshop in the Female Penitentiary in Požega since 2016. As a result of her direct artistic work with marginalized groups, she produced short documentaries “Free Weekend”, the first documentary filmed by inmates in Croatia, and “The Right to Work: The Way We Left It” (winner of the Ethics and Human Rights Award at the Days of Croatian Film 2016), written and filmed by protégées of the Children’s Home in Kastel Luksic in Croatia. The book club and the creative writing workshop in Female Penitentiary in Požega resulted in a collaborative short story collection “Nastavi priču”, which received the Sozial Marie prize for social innovation in 2021.

Her short stories have been broadly published, translated into five languages, and performed on the Croatian National Radio (HR3). Her first book of short stories, “Jesmo li to bili mi” (2019) is the winner of national award “Prozak” for the best unpublished manuscript by an author under 35, national award “Slavić” for the best literary debut in any genre, and regional award for the best short story collection “Edo Budiša”.  In 2021. “Jesmo li to bili mi” received an award from the Croatian Ministry of Culture as one of the best books of 2019. She is one of the six regional authors to take part in a collaborative diary writing project entitled “2020” and published by Fraktura, Croatia (2021), Booka, Serbia (2022) and Antolog, Macedonia (2022). She is the recipient of the “Mali Marulić Award”, national award for best play for children, for a theater piece based on her upcoming picture book “Jajo i Strašni Strah”. She is currently working on her first novel “A Brief History of Blue” and a screenplay adaptation of “Jesmo li to bili mi”, set to be made into a feature film by production house Wolfgang and Dolly.

Luiza Bouharaoua (1985, Croatia) is a contemporary artist in every sense of the word. She has interwoven her artistic work with social activity – as an activist, feminist, organizer, cultural worker, and producer. As the founder and coordinator of the non-governmental organization Skribonauti, she designs and leads literary and artistic programs for male and female prisoners in Croatia, and one of the results of the project is the short-prose collection Nastavi priču (Continue the story), which received the SozialMarie 2021 social innovation award. Book of short stories Jesmo li to bili mi (Was this us), for which she received several awards, is a post-Yugoslav, post-war prose of the generation of the 1980s, which discovers its existence, fluid identity, relationships, and values ​​in a highly precarious society of exploitative capitalism and mindless consumerism. Her writing is poetic, psychologically deep, yet direct and real.