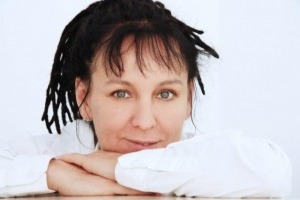 The Polish writer, essayist, and scriptwriter Olga Tokarczuk was born in 1962 in Sulechow, Lower Silesia. She graduated in Clinical Psychology from the University of Warsaw and worked for a while as a psychotherapist after completing her studies, but soon began to focus on writing professionally. She debuted in 1979 with a series of short stories in the Na przełajmagazine and has also published her work in the Wroclaw-based Mandragora magazine and the Życiu Literacki. Her debut novel, Podróż ludzi Księgi (The Journey of the Book People), was published in 1993 and was awarded with the Polish Publishers’ Association Prize. Ever since then, Olga Tokarczuk’s novels and short stories have ranked her amongst the very top of Polish contemporary writers of prose. She is an outstanding narrator, who manages to thrill both critics and readers alike with the innovativeness and diversity of her works in regard to content as well as genre. To date she has published eight novels, two books of short prose, and two collections of essays for which she has received a string of Polish and foreign literary awards. She has won the Nike Readers’ Choice Award no less than four times, and in 2008 was awarded with the premier Nike Literary Award for the novel Bieguni (Runners). Her books have been translated into most European languages. Many of her works have also been adapted for the stage as well as the screen. She conducts seminars on prose fiction as part of the creative writing programmes at the Jagiellonian University in Krakow and at Opole University. She was also one of the initiators of the International Short Story Festival in Wroclaw. Today she lives and works in Lower Silesia.

From the laudation by Jana Unuk