The CEI Fellowship for Writers in Residence is a newly established award presented by the Central European Initiative in collaboration with the Slovene Writers’ Association as part of the Vilenica Festival. The Fellowship seeks to encourage cross-border cooperation and promotion in the field of literature for young writers from Central European Initiative member states that are not members of the European Union. The Fellowship, which is endowed with a cash award of 5,000 EUR, is intended to be used for a three-month residence in any CEI member state of the candidate’s choice. During this period, the author will work on the project he or she indicated in the application form. 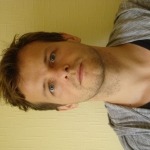 Artem Chapeye started writing at the age of 26. His debut An Adventure (2008) is the account of a year and a half spent wandering through the Americas, doing random jobs for a living. The award-winning Travels with Mamayota: In Search of Ukraine (2011) is based on interviews with people all over the country during a two-month motorcycle trip, and his debut novel Red Zone (2013) is set in the near future.

“From the laudation by International jury for the CEI Fellowship 2013:
Artem Chapeye’s project spreads a topical, socially committed message, endeavouring to shed a light on the critical problem of economic migration in Eastern Ukraine. The issues of economic migrants are universal and Chapeye’s main character is presented as the most contemporary hero of our time, a marginalised Everyman who sprouted from the outskirts of Europe. The story speaks about loneliness and damnation and alerts to violence with a humanistic and topical touch; to the violence, which is latent in Eastern Civilisation and amongst humanity, threatening to erupt sooner or later and wipe us all from the surface of the Earth.
The project is oriented towards the future and the book is based on the acute problem of a globalised world. This might, in itself, sound like a huge cliché. Yet the author’s description of the project and the concept of the book reveal that the broad research he has conducted and his vast experience enable him to meticulously detect and dissect the setting of the narrative, the hero, and the characters connected to the protagonist. With his sophisticated and enticing narrative style, Chapeye’s enables the story to break through local boundaries from the very beginning.
His biography and bibliography reveal Artem Chapeye to be a true authority on the topic on which the novel intends to focus, and that he is an inquisitive explorer, who draws the subject matter for his literary exploits directly from the source, from a close-up view.”